Humans and Werewolves vs. Vampires

Horror writer Steve Niles has a thing for vampires — just not in the usual settings, as he proved with his famous comic book 30 Days of Night. Now, he’s taken them in a more science fiction direction with his latest work: Broken Moon, illustrated by Nat Jones and published by American Gothic Press. Here’s their summary: “After the world’s superpowers go nuclear on one another’s lunar mining colonies, destroying much of the moon, the human population of earth is largely wiped out in the ensuing natural disasters. In the wake of humanity’s near extinction, the monsters that had been banished to the shadows have risen up and seized power. The kingdom of vampires thrives under the cover of nuclear winter on the east coast. The werewolves live like nomad outlaws, prowling the plains of the west. And in the north, Dr. Frankenstein and his army of the re-animated wait. But while an uneasy truce has existed for decades, the clouds are beginning to recede, threatening the vampires and their dominion. War is coming.” The werewolf tribes and the few remaining humans form an uneasy alliance to keep the vampire lords from destroying the world. Want to find out more? Check out the preview over at Comics Alliance. The first volume of Broken Moon is on the shelves now. 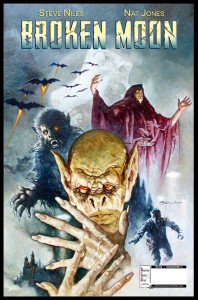