Back to Save Your Tail Feathers

Everyone’s favorite insane seabird super-spy squad is back again in a new 4-issue full-color mini-series, Penguins of Madagascar: Elite-ist of the Elite. “It’s the start of a senses-shattering four-part Penguins of Madagascar epic story! An army of robots threatens to take over the world – and only our four feathered friends can stop them!” Taking a spin on Dreamworks’ (not as successful as they had hoped…) Penguins animated feature, the comic also includes back-up stories with the baby penguins and The North Wind. Written by Cavan Scott and illustrated by Lucas Ferreyra, this new series hits the shelves in March. Check out the alternate covers and more at Titan’s Tumblr page. 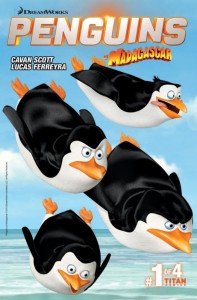