In case you haven’t been keeping up with Marvel’s Guardian’s of the Galaxy (as in the comics) lately… Last year Peter Quill gave up his duties as Star Lord to become the Emperor of Spartax. Leaving the Guardians in the paws of… none other than fan favorite furry, Rocket Raccoon! So Rocket assembled a team that included not only his old buddy Groot and his new-buddy Drax but also (among others) Kitty Pryde of the X-Men and none other than Ben Grimm, the Thing from Fantastic 4! Just in time too, as dangerous new threats have swung into this part of the galaxy… and some old friends may not be trustworthy.  Big shock. Now Marvel Comics has assembled Volume 1 (i.e. issues 1 thru 5) of Guardians of the Galaxy: New Order into a full-color hardcover collection, written by Brian Michael Bendis and illustrated by Valerio Schiti. Take a look over at Goodreads. 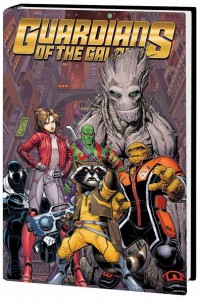