Man and Wolf Together As One

Thousands of years ago, a god-like man and a wolf-monster join forces — and spirits — to defeat a monstrous threat known as The Hungry Ones. A thousand years later, when the tribes are under attack once more, the spirit of vengeance known as the Ghost Wolf is born again — in the form of a fearless young woman. That’s the story behind Ghost Wolf, a full-color comic book series created by El Torres and illustrated by Angel Hernandez. Now Amigo Comics have released the first Ghost Wolf story arc at a single trade paperback, Ghost Wolf: Born in Snow and Blood. Check out the preview over at their web site. 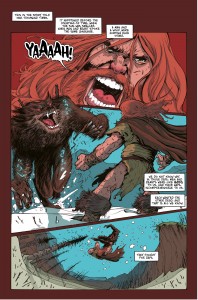