We Wish You Wouldn’t Imagine That

Creature Entertainment (home of Bubba the Redneck Werewolf) has a new full-color comic book mini-series called Tommy: Cereal Killer. “What can you do when you find out your imaginary friend, who happens to also to be your pet rabbit, is a serial killer, and you’re the only one who knows? Oh, and you’re seven years-old… and nobody believes you? That’s Tommy’s reality – but now he means to change it! In the premiere issue of this 4-part mini-series, we are introduced to the cast of Tommy’s world, including the joyless Principal Crabtree, his woozy mother Sharon, and his ‘pet’ rabbit Jack, a mean-spirited and relentless taskmaster who is ruining the boy’s life while trying to ‘fix’ it.” Written by John Ulloa and Al Bondiga, with art by Juan Navarro, the first issue of Tommy is on the shelves now — and at Creature’s web site. 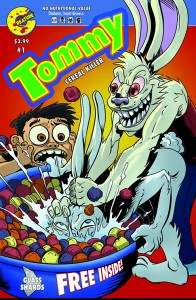