Papercutz (home, once again, of Geronimo Stilton and family) have a new series of three Disney Graphic Novels coming to bookshelves later this month. Volume 1 is based on the world of Disney’s Planes (which is based on the world of Pixar’s Cars, of course). Volume 3 is called Minnie and Daisy: Best Friends Forever, which probably speaks for itself. Most unusual perhaps is Volume 2, entitled X-Mickey. “It’s a supernatural Disney adventure as Mickey Mouse meets Pipwolf, a werewolf who bears more than a passing resemblance to Goofy! X-Mickey is a fun Disney series that introduces everyone’s favorite mouse to another dimension full of spooks, ghosts, goblins and more. Accompanied by Pipwolf and an albino mouse named Manny, Mickey must do everything he can to keep Mouseton safe and keep these creatures locked up where they belong.” 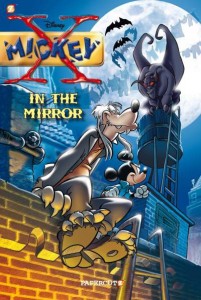