Rocket Raccoon (even with Groot in tow) might not seem the most likely candidate for a young readers’ novel. But that’s just what Tom Angleberger brings us in his new hardcover book, Rocket and Groot: Stranded on Planet Strip Mall. “After battling deadly space piranhas in Sector 7 of the Cosmos, Rocket and Groot crash-land on a planet made up of strip malls, maniacal robots bent on customer service, and killer toilets – yes, killer toilets! Told through the eyes of Rocket, Rocket and Groot will feature simple black-and-white drawing throughout, as Rocket uses a space stylus to express his adventures, visually, while Veronica, their space recording companion, lays out the adventure in text! Granted, the drawings are done by a space raccoon with a bad attitude, but what would happen if he gave Groot a shot to draw an adventure they had been on? What would we get? We’ll find out in the final chapter!” You have been warned. The book is available now from Marvel Press. 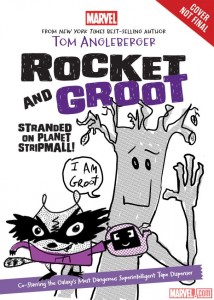