She Followed Them… Everywhere!

Yes, still, it’s sometimes best to just let the creators explain their own work. So, here’s the tag for new graphic novel Little Dee and the Penguin: “When Little Dee meets a motley crew of animals deep in the forest, she knows she’s found the perfect set of new friends. Between the bossy vulture, the slightly dim dog, the nurturing bear, and the happy-go-lucky penguin, this mismatched group of big personalities doesn’t always get along—but they’re a family.  And they’re on the run. A pair of hungry polar bears are after the penguin, and the rest of the team are determined to protect her. They’re not interested in adopting a tiny human. But Dee loves them—especially Ted the bear—and she won’t let them go. Instead, she hops on their getaway plane and joins them on an around-the-world adventure.” Written and illustrated by Christopher Baldwin, it’s based on his continuing web comic of the same name. And now it’s available in full-color from Dial Books, coming this April in hardcover and trade paperback. 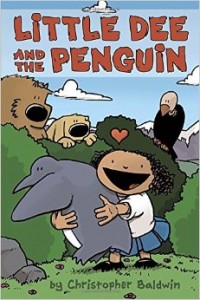