Now check this out over at Kids Can Press: “Fluffy Vandermere, the cat sergeant in charge of P.U.R.S.T. (Pets of the Universe Ready for Space Travel), works tirelessly to protect the world from alien (aka bug) domination. It’s a big job. “The whole planet is Fluffy’s space station. All the people in the world are his humans. And every space pet out there is his responsibility.” Now, suddenly and without warning, Fluffy discovers P.U.R.S.T. headquarters, the most secure building in the world, is under attack by an angry swarm of insects, and they’re armed with every cat’s worst nightmare — spray bottles! Warding off this level of terrifying invasion will require cunning, skill, ingenuity and the ability to move quickly. Fluffy’s been out of the field and at his desk job for quite some time now — is he up to this massive challenge? You bet he is!” Fluffy Strikes Back is the creation of writer and artist Ashley Spires. This new full-color graphic novel for intermediate readers is a spin-off from her successful Binky adventure series. It’s available in trade paperback and hardcover editions. 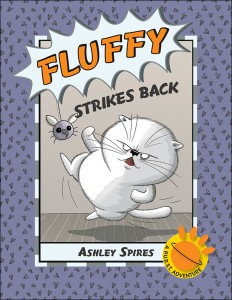