New discoveries from this year’s WonderCon: Rikki is a full-color comic book adaptation of Rudyard Kipling’s well-known mongoose-vs.-cobra story Rikki Tikki Tavi. The story was adapted and updated to a more modern setting by Norm Harper, with illustrations by Matthew Foltz-Gray. Originally created as a 4-issue comic book mini-series, after a successful Kickstarter campaign they re-released Rikki as a graphic novel in trade paperback, complete with the original Kipling story as well as a cover-gallery by the artist Christine Knopp. Find out more over at the publisher, Karate Petshop. 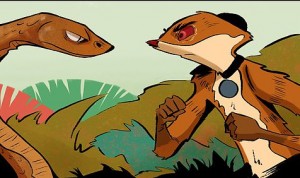