No More is Need for Sad-Mad

Over at Animation Scoop they have word about a new TV series adapted from Dreamworks Animation’s successful (some might say keester-saving) movie Home. “Developed by Ryan Crego (Sanjay and Craig, Shrek Forever After) and Thurop Van Orman (The Marvelous Misadventures of Flapjack), and executive produced by Ryan Crego, DreamWorks Animation’s Home: Adventures With Tip & Oh, an all-new Netflix Original Series, answers the question: What happens after a misfit alien conquers Earth, befriends an adventurous teen girl named Tip and together they save the day? Picking up where the hit 2015 animated film left off and building upon their enduring friendship, this animated buddy comedy follows fearless Tip and overenthusiastic alien Oh, as they navigate the combined human and alien culture they live in, finding adventure everywhere they go… The first season will be available exclusively to Netflix members in the U.S., Canada, Latin America, UK, Australia, New Zealand, Ireland, the Nordics, Benelux, and France beginning July 29.” Heard it here did you. 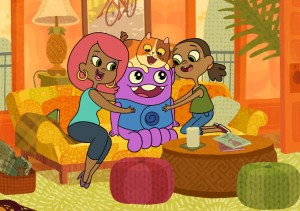