The Boy, The Girl, and The Animals

More new stuff found at WonderCon last month: Houndstooth is a new self-published comic written by Kristen Brown and illustrated by Sam Rusk in a monochrome wash style. “Houndstooth follows the adventures of Bandit, an orphaned boy who exists in an animal’s world, along with his fellow human and best friend, Pan. The only adventure Bandit has ever wanted to have, are the ones printed inside his favorite books. But fate brought an unwanted adventure to his feet when Pan is kidnapped! Her only hope of rescue is Bandit and a couple of unlikely tag-alongs.” Issues are being released bi-monthly, both in physical (paper) form and on-line at Comixology. 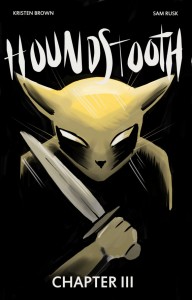