Squirrel Girl and Howard the Duck to crossover in 2016 Marvel comics launched two titles early this year featuring slightly obscure, slightly ridiculous and more-than-slightly furry characters; Howard the Duck and The Unbeatable Squirrel Girl. Actually, they will both have two #1 issues by the end of the year (The Unbeatable Squirrel Girl's second first issue came out this week, while Howard the Duck returns on November 4). Both have gained mostly positive reviews since their launches, so of course these two characters will appear in each other's books in a crossover next spring.

Not much detail is known at the moment about what these two characters will be doing that will require them to team-up, but Marvel has revealed an advance solicit (that is admittedly less than helpful):

This summer, the two most powerful characters in the Marvel Universe clash! You asked for it ... you demanded it ... and now you'll get it: GALACTUS versus WOLVERINE! Just kidding, the story's actually about Squirrel Girl and Howard the Duck, and instead of fighting they solve problems together. Sorry for making you think Galactus and Wolverine would fight, maybe that should be our next team-up though since it's not a bad idea at all. Wolverine could get some Power Cosmic on her claws to create the Power Clawsmic and Galactus could be all "OH NO YOU DIDN'T". Anyway, in our story Howard and Squirrel Girl fight some dudes and learn some important lessons and Galactus doesn't even show up once, the end. 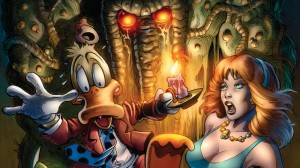 For all the hubbub about Marvel Studios deciding to go with an obscure team featuring a talking raccoon with a machine gun for their latest movie, they’re only continuing on as they started.

Think about it; not counting serials, what was the first DC universe character to get his own movie? Batman, followed by Superman (followed by Batman, Batman again, even more Batman, Superman, Superman and next Batman and Superman together). That’s their two biggest guns, and barring that weird Ryan Reynolds thing and Vertigo adaptations, that’s about it.

What was Marvel’s first superhero to get his own theatrical movie? Howard the Duck, followed by Blade, a character who struggles to headline his own comic books, but somehow managed a trilogy of movies. Yeah, Howard the Duck was the first obvious warning sign George Lucas wasn’t perfect, but now that Guardians of the Galaxy movie doesn’t sound so weird, does it?

Anyway, this is a special edition of Pull List; we’re taking a look back at one of the odder cult characters in mainstream comics. Howard the Duck got his start in a horror comic, of all places, created by weird writer extraordinaire Steve Gerber (four words: elf with a gun). Howard would have been a nobody in his home universe, where everybody is a duck, but he got stuck in our world, “trapped in a world he never made,” as the series’ tagline goes (which kind of applies to everybody, but whatever), so he got his own comic book series here.

His comics’ introduction describes him:

From the time of his hatching, he was … different. A potentially brilliant scholar who dreaded the structured environment of school, he educated himself in the streets, taking whatever work was available, formulating his philosophy of self from what he learned of the world about him. And then the Cosmic Axis shifted … and that world changed. Suddenly, he was stranded in a universe he could not fathom. Without warning, he became a strange fowl in an even stranger land.