If you thought $1600 for an inflatable husky was excessive, consider this pre-owned MixedCandy German Shepherd, auctioned last week for $7000. [tip: sardognsca/fursuitlounge]

The suit was the subject of a five-way bidding war throughout Saturday before the winner swept in with their last-minute bid.

MixedCandy is well-known for expensive wolves and canines, but this price is more commonly associated with a new custom suit — or rather, two of them. 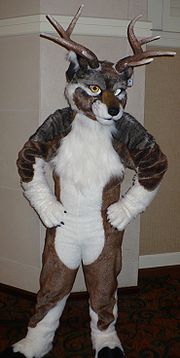