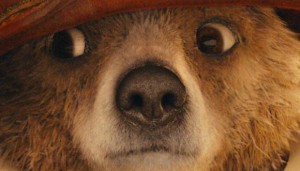 From Peru to London… to the Movie Screen

Head out to the movies lately and you’re likely to see the teaser trailer for the new live-action film Paddington — featuring a world-famous little bear in a blue overcoat and a floppy brown hat. For those not familiar with the star of Michael Bond’s beloved series of children’s books (started in 1958), Paddington is a small, human-speaking bear who travels from the wilds of Peru to England — where he hooks up with a nurturing human family, who name him after the train station where they found him. Paddington has appeared in TV series before (both animated and puppetry), but this is his first feature film. It’s produced by David Heyman (who produced all eight Harry Potter films), and written and directed by Paul King, best known for Britain’s The Mighty Boosh (which, you may recall, had its own fair share of furry content). The movie adaptation stars the Colin Firth as the voice of the CGI little ursine star. Check out the article at Yahoo Movies to find out more — and see the trailer. The film comes to theaters in North America this December.