Arm the Animals is a group with a simple mission: “Create killer T-Shirts that make a statement and generate funds for small, struggling animal rescues.” To that end they offer a full line of t-shirts, hats, posters, and fashion accessories, all illustrated with an eye for AAA — that stands for animals, artistry, and attitude! Check out their web site to find their latest designs, which they are constantly adding to. They also make the rounds at several comic book conventions and pet shows as well. Their front page includes profiles of several of the animal rescue organizations they are currently helping to fund. 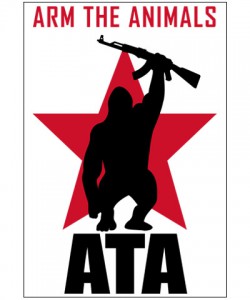 What's the 'Fast and Furious' scandal? Why should furs care?

Last week the U.S. House of Representatives voted to hold Attorney General Eric Holder in contempt of Congress. The charge? Illegally withholding documents that the House had lawfully subpoenaed regarding an ATF program gone berserk.

Pretty much everyone agrees that the Fast and Furious operation itself – which began under the Obama presidency and thus was ultimately overseen by Eric Holder and which involved supplying Mexican drug cartels with weapons without so much as consulting the Mexican government – was an ill-conceived failure, so poorly planned as to border upon the absurd. This much, the administration has acknowledged. But what they seem to want to cover up is, who knew what and when did they know it?

Is that cow really a tank? Kill it!

A new British "invisibility cloak" infra-red system, Adaptiv, makes it possible to disguise military vehicles as large animals such as cows, even while moving. This has the potential during warfare to get a lot of animals killed, just to play safe.

Guns permeate American culture — and fursuiters are popular targets, getting shot in TV shows, music videos and even fan-made productions.

To foreigners, COPS is accepted as the gospel truth; visitors half-expect to see Mickey Mouse strolling into Disneyland with a .45 at his hip, or a rifle slung across his back.

But for residents, the truth is more nuanced, as two-time Anthrocon attendee David Ross found when he was banned after openly — and legally — carrying a firearm in Pennsylvania.
Guns permeate American culture — and fursuiters are popular targets, getting shot in TV shows, music videos and even fan-made productions.

To foreigners, COPS is accepted as the gospel truth; visitors half-expect to see Mickey Mouse strolling into Disneyland with a .45 at his hip, or a rifle slung across his back.

But for residents, the truth is more nuanced, as two-time Anthrocon attendee David Ross found when he was banned after openly — and legally — carrying a firearm in Pennsylvania.