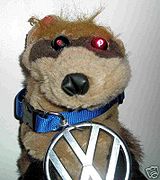 The Funday PawPet Show is a four-hour live talk show presented by hand-puppet and broadcast over the Internet on Sunday nights. Poink is usually present at the lower right corner of the screen. 336 shows have been performed as of 17 June, and over a hundred people regularly log into the show's IRC channel during broadcast.