The Return of Pantha

No, not the semi-cat Teen Titan, this is Pantha from Harris Comics — home to the famed Vampirella. Now Dynamite Entertainment has revived Pantha in a brand-new full-color comic book series written by Brandon Jerwa with art by Pow Rodix. Pantha is a shape-shifting cat-woman, an embodiment of the Egyptian goddess Sekhmet. “She stalks the night, driving the forces of Chaos from the shadows and hunting them down like prey! Much more than a feral shapeshifter, Pantha is also an avatar for the Egyptian goddess Sekhmet – and she’s going to learn that history can repeat in a violent, terrifying way! Featuring the  return of several heroes and villains from the pages of Pantha and Vampirella, ‘Dangerous Game’ will be an important cornerstone for the future of  Dynamite’s epic Vampirella universe!” That’s the official word from the publisher. Look for it this June. 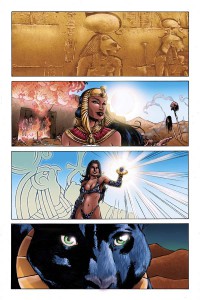