Unico is a well-known and well-loved anime and manga character created by the late great Osamu Tezuka in 1976. A baby unicorn with the magical ability to make people happy, he draws the wrath of jealous gods who think only they should have such powers. Tezuka was unsuccessful in turning his popular manga into a TV series, but Unico did find his way into a pair of feature films in the early 1980′s.  In The Fantastic Adventures of Unico (from 1981, directed by Toshio Hirata), the West Wind is charged with carrying Unico away to a far-off land when the gods banish him — but she takes pity on him and sets him free.  Now Unico and his friends are on the run, with the angry gods in hot pursuit! Then in 1883 came Unico in the Island of Magic (directed by Moribi Murano) where Unico and his friends join the fight against an evil wizard who plans to turn all living things into his zombie slaves. Both feature films (dubbed into English) were popular VHS tapes in the late 80′s but have long since gone out of print. Now comes the word that Discotek Media are releasing both Unico films on DVD this month, each with both the English and original Japanese soundtracks. You can find out more about all of this (including several Unico fan sites) by checking out Unico on Wikipedia. 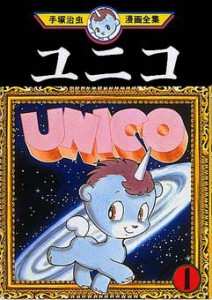