This will, somewhat surprisingly, be the first adaptation to film for a Morrison comic, who is credited as an executive producer for the show. Furries may be best familiar with Morrison for the comic miniseries We3, which featured a trio of lost pets (a cat, a dog, and a rabbit) searching for a way home, with the twist that they have been turned into killing machines by the U.S. military.

Oswalt is a popular comedian who voiced Remy the rat in the Oscar winning Pixar movie Ratatouille. More recently, he played the "Mad" Max (a.k.a. TV's son of TV's Frank) on the recent Netflic "restoration" of cult show Mystery Science Theater 3000.

The character of Happy was originally drawn by Darick Robertson. 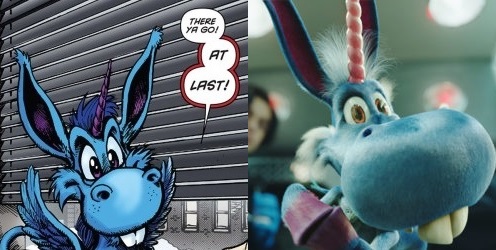 The story, in addition to being about both crime and unicorns, is also set around Christmas, hence the end of year air date.

So this is what Chris Meloni is doing these days...

But he should really breathe, he went from purple to blue.

I somehow managed to royally fuck up the links in the first paragraph two different ways, but they should actually work and not delete half of the explanation now.

So... this looks bonkers. Color me interested (but not blue).