Furries on Stage in Southern California

Jeff Goode is the creator of American Dragon: Jake Long for the Disney Channel. Previous to that he was well-known as a playwright, responsible for such works as The Eight: Reindeer Monologues. He has also been a Guest of Honor at several furry fandom conventions. Combine all those facts and you might just have an explanation for his latest work for the stage, Fursona Non Grata. Here’s what the press release says: “A young woman raised furry brings her mundane fiancé home for the holidays to meet her family for the first time.  Fur-larity ensues. Screenwriter and playwright Jeff Goode, the creator of Disney’s American Dragon: Jake Long and the author of The Eight: Reindeer Monologues is developing a new stage play for SkyPilot Theatre Company in Los Angeles, inspired in part by his misadventures as a GoH at Califur, Rocket City Furmeet and Oklacon.  The original comedy Fursona Non Grata will have its first public reading on:  Sunday, June 17 @ 3:00 p.m.  at the Sherry Theater, 11052 Magnolia Blvd, North Hollywood, CA. Admission is Free! Featuring Katie Apicella, Jude Evans, Brett Fleisher, Kelly Goodman, Joanna Kalafatis, Christian Levatino, Bart Petty, Rosina Pinchot, and Julia Sanford.  There will be a post-reading talk-back with the author.  This will be a chance for actors, audience and the furry fandom to give the author direct feedback on this new work-in-progress which is set to premiere in 2013 as part of SkyPilot’s main stage season.” Fursona Non Grata also has its own Facebook page where you can learn more about the new production. 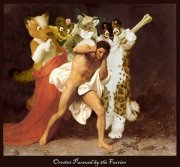