The Dinosaurs Want Their Say!

Taking a break from matter of Further Confusion for something a bit more unique: A new entry in the slowly-growing pantheon of anthropomorphic live theater. Triassic Parq recently won the Best Musical Award at the Fringe NYC theater festival. Written and directed by Marshall Pailet (with help from Bryce Norbitz and Stephen Wargo), it’s described like this: “… a hilariously inventive and decidedly adult take on the Spielberg blockbuster — as told from the point-of-view of the captive dinosaurs. With plenty of goats around to eat, this tribe of non-breeders is pretty satisfied with life. But when a T. rex suddenly sprouts the male sex organ and falls in love, the dinos’ entire belief system comes into question, evolving into a battle between the Velociraptors of Faith and Science. Narrated by none other than Morgan Freeman (played by Camryn Zelinger), Triassic Parq is a true thrill ride 200 million years in the making, filled with singing, dancing and a wide variety of reptilian hook-ups.” You heard it here. Keep an eye out for a traveling company performing Triassic Parq near  you. If you’re currently near Southern California, Chance Theater in Anaheim Hills is performing the play from now until late February. Check out their web site . 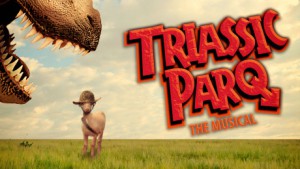