Cages Will Not Hold Them

James Patterson is a world-famous thriller and mystery novelist, well-known for such best-selling book lines as the Alex Cross Series (including Kiss the Girls and Along Came A Spider, both of which have been adapted into movies). Now his latest work, Zoo, has been adapted before it even comes out… this time, as a graphic novel! Written by Mr. Patterson and Michael Ledwidge, Zoo has been adapted and illustrated by Andy McDonald. The hardcover black & white book will be released by Yen Press in November.  So what’s it about, and why are we telling you here?  Check it: “All over the world, brutal attacks are crippling entire cities. Jackson Oz, a young biologist, watches the escalating events with an increasing sense of dread. When he witnesses a coordinated lion ambush in Africa, the enormity of the violence to come becomes terrifyingly clear. With the help of ecologist Chloe Tousignant, Oz races to warn world leaders before it’s too late. The attacks are growing in ferocity, cunning, and planning, and soon there will be no place left for humans to hide. ” 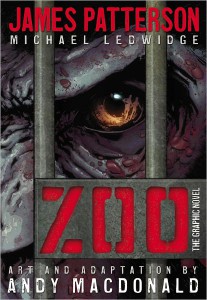