Not Your Ordinary Cat

Out in the wide Arizona desert, near a top-secret military research facility, there lived a young kitten with the unusual name of Three.  Then one day, there was a terrible accident at at the facility… That’s the story behind Sonora, a new full-color comic book series written by Mike Kessler and illustrated by Erin Taylor. After a terrible explosion, the surviving animals of this desert region awaken to find they have gained amazing powers…  Some of them will use those powers for good, and others… will not.  Published by Bleating Goat Comics, whose web site has information about this and other independent comic books. 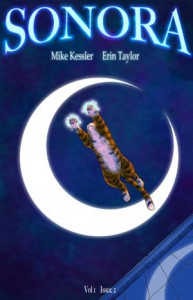