Save the Snakes! Save the World!

Serusis is the title of a new 5-issue full-color comic mini-series coming late in June from Big Dog Ink. “Planet Serusis is under the control of the Reliton army and its ruthless leader, Snogard. In an attempt to save their world, two Serusisans kidnap a group of humans in the hopes that they will be able to access the secrets of the creators of Serusis itself. Four humans versus the Reliton army? Good luck with that.” The Serusisans, by the way, resemble large snakes with terrific hairdo’s. The Relitons are big reptiles too, with four limbs and lots of attitude. This all-ages series is written by Tom Hutchison (Critter) and illustrated by Owen Gieni (Avengelyne). Things From Another World has more. 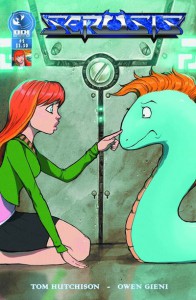