The title of this collection is misleading; it collects almost every issue Rocket Raccoon and/or Groot appeared in with the exceptions of any issues of Guardians of the Galaxy or books where they appeared as part of that team. As a side note, Rocket is the only Guardian who has been an active member of that team since the beginning (not counting the original, alternate future Guardians); even Star-Lord was momentarily kicked off the team.

But anyway, these are the solo adventures of both Groot and Rocket, plus their team ups, including their first appearances in Tales to Astonish #13 way back in 1959 for Groot (that’s right, Groot is over half a century old) and both of Rocket Raccoon’s first appearances. I’ll explain that better below.

All together, they form a great introduction to the characters, especially for fans whose only knowledge that these two characters exists comes from the upcoming movie.

This collection includes stories by Bill Mantlo, Dan Abnett and Andy Lanning, and Larry Lieber, with art by Keith Giffen, Sal Buscema, Mike Mignola, Timothy Green II and Jack Kirby. The cover is by Mike Mignola, with a back cover by Skottie Young. 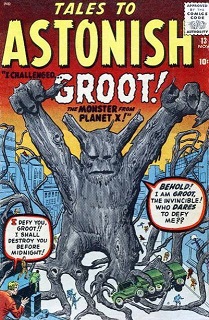 Tales to Astonish #13: “I Challenged Groot the Monster from Planet X!”

This story, written by Larry Lieber, with art by Jack Kirby, is the only Groot solo story in the collection. Our narrator and hero, biologist Leslie Evans, is driving home one night when he sees a meteorite hit the ground nearby (that old chestnut; Guardians of the Galaxy director James Gunn’s first movie, Slither, features a hilarious sendup of this trope).

Eventually, our hero encounters a “wood-giant” who can control all wooden constructs, which it absorbs into itself to grow. Groot’s power set is a bit different nowadays, and another thing that’s changed is his vocabulary. He does say “I am Groot!” but it’s part of a longer speech:

Earthlings – hear me!! I am Groot, monarch of Planet X! I come to take an Earth village – your village, back to my planet! We want to study you, to experiment on you!

Eventually, our hero defeats Groot with … termites. Groot is said to actually be dead in this comic, but he either regenerated (he’s come back from worse) or there’s another possibility a later comic offers, but we’ll get to that in a moment.

Marvel Preview #7: “The Sword in the Star: Witchworld”

This is the first appearance of one Rocky Raccoon. However, as it was written by Bill Mantlo, it’s usually seen as a rough draft of the character we now know and love as Rocket. The story is now non-canonical with the rest of the Marvel universe (I’m sure it has some alternate universe designation somewhere), but it’s an odd tale featuring some really tripped out black and white space opera art from Keith Giffen.

The story ends on a cliffhanger, followed by this message:

This is the second installment of The Sword in the Star - and maybe the last! Only your letters, and, mostly, your support can bring it back for a third try. It’s up to you, pilgrims!

Incredible Hulk #271: “Now Somewhere in the Black Holes of Sirius Major There Lived a Young Boy by the Name of Rocket Raccoon!”

Yes, that’s the title of Rocket Raccoon’s official first appearance; Hulk has, for some reason, been shot into space and wound up on a weird planet known as Halfworld where a variety of talking animals live on one hemisphere, and robots live on the other. Therefore, Halfworld.

In addition to Rocket, we meet Rocket’s first mate, Wal Russ, his love interest and perpetual damsel in distress, Lylla the otter, the villains Blackjack O’Hare and mole Judson Jakes, as well as the seemingly villainous turtle, Uncle Pyko. Of course, Hulk and Rocket team up. Together, they fight clowns.

This comic is indescribably weird, but from a modern perspective, possibly the most interesting thing is that it travels through all the weirdness in just one issue, and even has time to set up the next issue. This is a one and done story. Today (setting aside that a story this bizarro would even happen), this would be a multi-issue story arc.

Sal Buscema’s art is not bad, but poor Lylla has this one expression that is supposed to express fear but instead makes her look like the Joker. This issue begins with the violent murder of an iguana by a doggerel spouting clown. Talk about tone issues. Turns out the poor dead iguana was making toys for Lord Dyvyne, a lizard who is Judson Jakes’ rival in the toy making business. The two animal toymakers sell toys to the Loonies, who are insane humans living on Halfworld, trying to decipher an incomprehensible Bible while the animals keep them safe and entertained. Now that the toymongers are going to war, Halfworld’s whole society is in danger, and it’s up to Rocket Raccoon and his friends to save the day.

I’m not even going to attempt to explain the plot of this mini-series beyond that; it all starts to make sense in a funny animal comic book kind of way by the end, but suffice it to say this is more about surreal humor than anything else.

The best part is probably Mike Mignola’s art, who either hasn’t developed his signature style, featuring simple lines and heavy use of blacks, yet, or hasn’t started using them. The animals are fairly realistic for a funny animal book, while still keeping a humorous overall feel. I think my favorite character design, however, belongs to the Robot Mare that helps Rocket and friends in the final issue.

This book is just absolutely charming; the fact that it really doesn’t make a lot of sense is part of its charm. These four issues appeared as the back-up story in the Annihilators mini-series; I believe they were originally supposed to be a separate mini-series, but Marvel decided to roll them together and give the more classic superhero team top billing.

Andy Lanning and Dan Abnett reintroduced these two characters in the Annihilation comic event, and brought them to the Guardians of the Galaxy as new found best of friends; this takes place after the first volume of the new Guardians comic was finished. Rocket has become disillusioned with the hero game, and has decided to get a real job. However, his job as a mail delivery boy is interrupted by a killer clown made from wood from Planet X. This has him teaming up with his old buddy Groot, and tracking the clown back to Halfworld, which he has for some reason completely forgotten.

I think this story is a rare misstep by Lanning and Abnett; it basically retcons Rocket’s original mini-series out of existence, positing it as a false memory Rocket has of his home planet, which he forgot for a reason. The story, once you get over that, has some great funny animal gags and an interesting science fiction superhero premise at its heart, but it’s really hard to get over.

Groot also gets retconned. Turns out, he’s not the monarch of Planet X; he’s a rogue bud off the monarch, also named Groot, which opens up the possibility that the original Groot that came to Earth was actually killed, and our Groot is a completely different being.

The art by Timothy Green II is alright, but it’s marred by the fact that I just didn’t like his take on either Rocket Raccoon or Groot. They are the only two character designs I didn’t like; too bad they had to be the leads. There is one fun scene at the opening of the third issue where Rocket relives a swimming scene from the original mini-series; notably, while Lylla was naked in the original, she dons a bikini for the modern rendition.

Rocket and Groot are once again the back-up feature for the Annihilators; this time, it’s clear that they were always intended as the back-up feature, as they embark on an adventure that’s more a of a quick gag than anything else.

They are captured by Mojo of Mojoworld, who wants to turn them into a show to sell action figures. It’s mostly forgettable; the weird thing is that, when the Guardians recently got their own action figures, Groot was divided up part by part among the various Guardians, an idea that was apparently inspired by this comic, as Groot is divided up among different variations of Rocket Raccoon action figures.

All in all, this is a must have for fans of Rocket Raccoon and Groot; I mean, it is the “Complete Collection,” after all. The marquis mini-series (the original Rocket Raccoon and the Annihilators back-up) are both must reads (if they unfortunately cancel each other out), while the rest are nice bonuses.