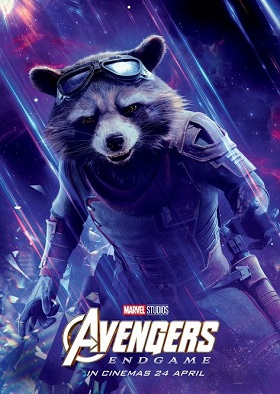 The movie begins on the day of the "snap" where half of all life in the universe was instantly erased from existence that capped off the last movie. The various surviving Avengers soon find out there's basically nothing they can do about this. Thanos (Josh Brolin), the villain responsible for the "snap", has made sure it will stick, unless someone randomly invents time travel or something. That's about all I'll reveal about the plot of the movie, because people have been just weird about spoilers with this movie.

The Avengers each have their own unique ways of dealing with the trauma of realizing they failed, and because of that failure, lost friends and loved ones. Thor's (Chris Hemsworth) depression is the most obvious. He hangs around on a couch playing Fortnite with his Thor: Ragnarok buddies. His original movie featured him proving himself worthy to wield a magical hammer. It has been lost in older movies, but it's obvious he doubts whether he would be worthy anymore. He's not the only one stressing, Black Widow (Scarlett Johansson) becomes the defacto leader of the surviving Avengers still active around the world, and she just looks overworked in her ever-changing hair. The only Avenger to come out seemingly in a better place is the Hulk (Mark Ruffalo), who has managed to use the trauma to finally merge his Hulk and Bruce Banner personas.

Of course, if the Avengers think they have it bad, then pity the poor Guardians of the Galaxy. Rocket (played by a combination of Bradley Cooper, Sean Gunn and the late, great Oreo) and off-again, on-again member Nebula (Karen Gillan) are the only two survivors of that team (at one point, the "snap" apparently reached out into the real world and even claimed their director, but it's okay, he got better). They're an interesting combination. Both are cybernetically enhanced characters who are not entirely happy about their upgrades. Nebula, surprisingly, becomes one of the more important characters in the movie. Rocket, meanwhile, gets paired up with Thor frequently, continuing their odd friendship began in the last movie.

The movie is basically one giant call back to the previous 21 movies in the series, and that's the thing about this movie. If you haven't seen at least some of them, I don't know if there's a point here. Just given how popular this movie franchise is, I mean, surely you have seen at least one. The thing is, I have no idea which ones you should watch to "prepare" for this one (besides Infinity War, obviously) and if that even matters. The only two I haven't seen are The Incredible Hulk and Captain Marvel, and while the former is long enough ago it really doesn't matter much anymore, I didn't really get much introduction to the title character of the latter here. Fortunately having ties to prior films really didn't take away from the experience, either. It's comic book story-telling. I can check out her story later if I want to. But if you're not used to it, it might not work as well for you.

In the end (and, for once, even though the MCU will continue chugging along, it does feel like some sort of end), it's a good movie made better if you've seen the previous movies. Which does not mean I'm recommending a 21 movie marathon, here. Basically, my recommendation is watch Iron Man, the original Avengers, the first Guardians of the Galaxy (which, to remind my target audience, is also the only place with any real furry content), Captain America: Winter Soldier and Thor: Ragnarok, and you can watch rest if you like them.

And I guess that's my final call. Those five movies are the top tier "have to see" movies of the MCU. That's not my recommendation of homework for Endgame, that's it. Endgame is good, but it's not the best MCU.

Also, while I'm here, I would just like to say the Avengers: Endgame tie-in limited time mode in Fortnite was garbage.

Well geez, that means there was a 50/50 chance you weren't going to be reviewing this film, huh.

I think that's the big reason the spoiler opposition was so strong this time around by the way. It wasn't even 24 hours before 'people didn't feel so good' about having the ending put into memes.

I've heard about this film. It got a big, sincere "meh" from me.

I recently decided to find out exactly what the Marvel cinematic universe actually is. It turns out I've seen exactly one of the films, the first Guardians of the Galaxy. Other than that, nothing really caught my attention or made me think I should watch it.

The comment sideboard cut this down to "I've heard about this film." and I was honestly hoping that was your entire comment, because that would have been awesome.

I agree, it was a decent movie though not one of the best in the franchise, but it did bring an excellent sense of closure to the long-running story arc. Actually what I found kind of surprising was the use of Captain Marvel. What with introducing a new hero at the last minute, the Captain Marvel movie two months ago was essentially her origin story, mostly set around 1995 or so, with some tie-ins to the present.

Then along comes Avengers: Endgame. She shows up at the start, fixes some things, gets some expository dialog going - then vanishes for most of the second half of the movie, until she kicks some serious ass at the end. Maybe she's a bit over-powered for the writers to be able to use her much? An OP hero needs an OP antagonist, which makes all the lesser-powered characters feel a bit useless.

That being said, I have a soft spot for some of the lesser-powered characters like Ant-Man and Star-Lord, so I was rather miffed they became butt-monkey comic relief characters. I mean, given how depressing the situation was, boy did this film need whatever comic relief it could fit in; I just don't like it being done at the expense of their characters. They had depth when they had their own films, but at this point most of that's thrown out when they're outclassed by everyone else.

Another issue, kind of like the Harry Potter franchise, is that at this point you've got so many characters, you don't have the time to make them all important. You have to sacrifice some of the screen time to fit everyone in, even if they don't get many scenes or lines. So it's understandable that they split people up into smaller groups and jumped back and forth between them, it's easier to focus on the smaller clumps. It was nice to see some characters get a bit of family time too.

The question is - what happens next with the MCU? New stories could go anywhere at this point. They've gotten a lot of their heros back. Some are very powerful; I wouldn't be surprised if they split them off into smaller groups to send them in different directions. And Iron Man (and, by association, Spider-Man) both essentially have magic power armor where the writers can put in whatever features they happen to need. Originally I would have guessed Galactus as the next big bad? Except then a friend reminded me of 2007's Fantastic Four: Rise of the Silver Surfer, which I'd avoided seeing and subsequently forgot that it existed.

Captain Marvel's role in this movie reminded me of Superman's in Justice League, but less aggravating. Probably because Endgame didn't spend so much time crying about her absence (in fact, I kinda forgot about her after a while).

I really wished we'd gotten a film to explore Bruce and Hulk's reconciliation. They spent two movies setting it up, and then just oh, time-skip, we're good now. I guess that can always be a future film, set in the past.

They should've just ended the series at Infinity War lmao

This movie was a total mess. The actors didn't seem to care as they plodded through one of the worst time travel based plotlines I've ever seen. I only watched it until the end to see how Thanos would get his. I guess to be fair, this had more actual story than the movie that preceeded it which was just a series of cameos of various superheroes getting their asses handed to them by Thanos as he racked up achievments...errrr....infinity stones. Seriously, if you aren't an absolute hard core Marvel comic fanatic, save your money and time and go see something else.

So I hear this is being re-released in cinemas soon. That must be some kind of record. I know sometimes films play in cinemas again, usually classics. I went to the 40 year anniversary screening of Life of Brian earlier this year but even given the ways films are remade, remastered, rebooted and whatnot, doing it not even a year later seems a bit shady.

I don't know who labeled it a "re-release", but it's really more they're doing its second run in first run theaters (because they can; theaters will take it), but "re-release" probably sounded better than "second run" if it was Disney. I don't think it's even out of some first run theaters yet (I mean, it's out of mine, but they're in a big renovation and have like five screens open); it's less a re-release than a "surge" on a still released movie. Maybe they're trying to beat Avatar (but since even Avatar is now officially Disney owned, what's the point?); maybe they're trying to get a boost signal to Spider-Man (though, once again, I mean, I don't know why they're worried); maybe they just realized that basically every movie since John Wick 3 and Detective Pikachu has flopped like fish and they're trying to take advantage of that (but now they've got Toy Story 3, I mean, maybe not the best timing?).

People are calling it a "re-release" because they're adding, like, six minutes of additional content or something.

Well, I'm not re-reviewing it, whatever the fuck it is!