How Does An Elephant Sneak?

Out-of-nowhere department… and more of a curiosity than a recommendation. There’s a new DVD out this week: A direct-to-video animated film called Elephant Kingdom. Here’s the tag: “When brave elephant Rock (Cary Elwes) sees his wife, Melody (Alexa PenaVega), kidnapped by the powerful human king (Patrick Warburton), the mighty warrior will need some jumbo-sized help from his friends in order to rescue her. Coming to his aid is a quirky, courageous troop of young elephants, including Rally (Carlos PenaVega), and Pugsley (Mikey Bolts), plus the ever-trusty and wacky Wingman (Garrett Clayton) and the kindhearted human queen (Ambyr Childers)”. Interestingly, other than “Grindstone Entertainment” and Lionsgate (who released it) we know next to nothing about who made this. The IMDB entry does not list any director, writers, or other crew; only the English-language voice actors.  It’s available and on the shelves now, but check out the trailer first. 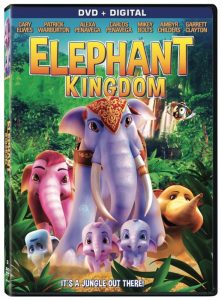 After doing some online searching, there's a 2009 Thai animated film called Khan Kluay 2 that was re-done in India in 2011 as Jumbo 2: The Return Of The Big Elephant? This might be an English dub of that.

Yeah, though with more emphasis on the little bird...