We could not make this stuff up if we wanted to, folks. Mickey’s Inferno. Yes: The scary portion of Dante’s Divine Comedy as re-told in full-color graphic novel format by Mickey and his friends. And Papercutz got Disney’s okay with this! It’s written by Guido Martina (who is a well-known creator of Disney material in Italy), illustrated by Angelo Bioletta, and available in softcover and hardcover editions — on the shelves right now. Gosh, is Purgatory next? 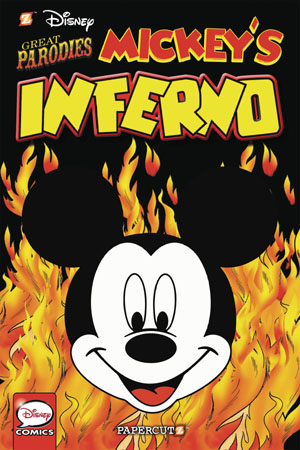 I don’t know how this specific edition may have been edited, but “L’Inferno di Topolino”, approved by Disney, was originally published in Italy in 1949. It’s been reprinted many times in many formats since then, in both Italy and the U.S.

It’s not really strange when you consider that Italy worships the poet Dante Alighieri and his “L’Inferno” (actually his entire “Divine Comedy”). There have been many adaptations of it over the last seven centuries.