Never sure what to make of anthropomorphic works where the furry folk are specifically presented as the villains… but anyway, here’s this: A classic manga fantasy, re-printed and translated into English (for the first time) by Drawn & Quarterly. “Kitaro and the Great Tanuki War features adventures of Shigeru Mizuki’s beloved yokai boy. In the epic title story, Kitaro battles the tanuki, a Japanese animal that features prominently in the country’s yokai legends. The furry beasts draw on the power of the blood moon to awaken the monstrous catfish that lives in the depths of the Earth. The twisting of the catfish causes earthquakes that threaten to destroy all of Japan. With his yokai allies captured, Kitaro is the only one left who can take on the great tanuki and his army. Will he be up for the challenge?” It’s available now at the D & Q web site. 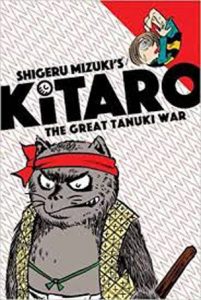 I've been surprised to see current articles about the tanuki &/or raccoon-dogs (some sources say they're identical; others say the tanuki are only one species of raccoon-dog -- but they don't say what the others are) that describe them as becoming invasive pests in Western Europe. Supposedly tanuki were imported into Western Russian fur farms, escaped, and have been spreading westward.

Similar to stories about Hermann Göring importing North American raccoons into Germany in the 1930s for hunting; their escaping into the wilds during World War II bombing raids; and their spreading throughout Europe since then.

Have any tanuki and raccoons met in the wild?