A Fox Raising A Hen House

We’ve been hearing for a while about Le Grand Mechant Renard, a European animated TV special directed by Benjamin Renner (co-director of Ernest & Celestine) based on his graphic novel. Well now First Second Books have released that graphic novel as a new full-color trade paperback, translated into English as The Big Bad Fox. The creator describes it like this: “[It’s] about a fox who isn’t strong enough to catch and eat chickens. Instead, he gets beaten by the chickens. So, he has this weird idea where he’s going to steal eggs and he’s going to raise the small chickens, pretending he’s the mother, but one day, he’s going to eat them.” Got that? There’s an extensive review over at the School Library Journal. Look for the graphic novel this month. 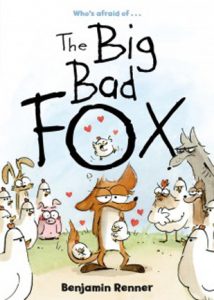 Really hoping the movie can slip in as one of the two "foreign language" slots at the Oscars this year; Ernest & Celestine was by the same group of people, so GKIDS should pick it up.