Growing Up Is Hard To Do

Mexico’s Anima Estudio have been mentioned around here before, most recently for their upcoming animated feature based on the 1960’s TV animation oddity Here Comes the Grump. In the meantime, they’ve completed work on another CGI feature called Monster Island, set to be released soon direct to DVD. “When Lucas finds out he is not really a human, but actually a monster, the news changes his whole world! Embarking on a quest to Monster Island to discover his real roots, Lucas undergoes a journey he will never forget. He finds himself face to face with more tentacles, fangs and far-out situations than he can shake one of his new wings at. Ultimately Lucas learns that being a freak, isn’t freaky — it means you’re a member of a brand new type of family that you can proudly call your own.” The film is directed by Leopoldo Aguilar, and it features the voices of Fiona Hardingham, Katie Leigh (Gummi Bears), Jenifer Kaplan, Erik Larsen, and Michael Robles. Amazon says to look for it this September. 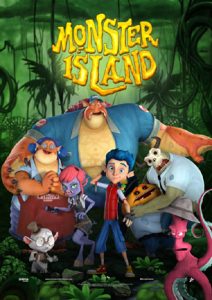