Another item we somehow passed over — and it’s been around a while! According to Wikipedia, The Jungle Bunch is a French / American / British animated TV series developed by David Alaux and Eric Tosti in 2013. It’s been airing in North America on the Universal Kids network. More recently a selection of episodes were edited together into a DVD release: The Jungle Bunch — The Movie, featuring the voice of John Lithgow. “The Jungle Bunch is the exciting tale of Maurice, a penguin who was raised in the jungle and thinks he’s a tiger! When two penguins from his Antarctic homeland come in search of ‘The Great Tiger Warrior’ to defend their colony from an invading herd of walruses, Maurice assembles a misfit team of jungle friends to save the day!” It’s available now at Amazon, and the trailer is up on YouTube. 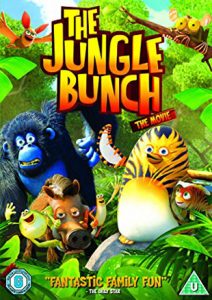 I reviewed the French original a couple of years ago.