Ventana Sur, Argentina’s annual film marketing convention, has a division called Animation! — which, no prizes for guessing, covers animated film and TV produced in Argentina and other Latin American countries. Recently Variety had an article about the latest crop of films being pushed this year, and at least two of them are of particular interest to furry fans. Noah’s Ark (perhaps not the most original title…) is being directed by Sérgio Machado (The Violin Teacher). According to the article, “…the musical comedy unspools as both an adventure and political fable turning on two bohemian mice – inspired by celebrated Brazilian composers Vinicius de Moraes and Carlos Jobim – confronted by the flood.” Then there’s Escape to India, produced by Juan José Campanella and directed by Gastón Gorali — the same team that gave us Underdogs, the foosball-come-to-life movie. “Escape to India follows Azadi, a courageous cow who, destined for the slaughterhouse in Patagonia, escapes and begins an epic journey to India, where her mother tells her that cows are venerated.” Again, no word yet on when these films might be released, but they are in the works. 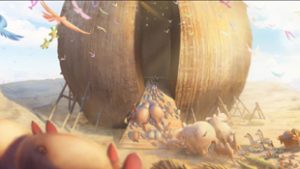 Okay, but why? There was already an Argentinian animated feature about Noah's Ark (from Patagonik) ten years ago.