And the strange mash-up of DC Comics and Hanna Barbera continues — and even expands. As you may recall, Snagglepuss made an appearance as a back-up story in the infamous Banana-Splitz-meet-the-Suicide-Squad comic. Well now the pink puma has his own new series all to himself, Exit Stage Left: The Snagglepuss Chronicles. “It’s 1953. While the United States is locked in a nuclear arms race with the Soviet Union, the gay Southern playwright known as Snagglepuss is the toast of Broadway. But success has made him a target. As he plans for his next hit play, Snagglepuss becomes the focus of the House Committee on Un-American Activities. And when powerful forces align to purge show business of its most subversive voices, no one is safe!” Written by Mark Russell and illustrated by Mike Feehan, the first issue is out now. Den of Geek has a review. 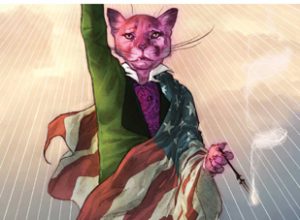 Read this one, it's a fine comic, just not very Snagglepussish... if that's a word. Had enough silly little gripes about the story direction to do a video review on it. Just gotta put it together.

Which one was the one that became a gay southern lawyer?