You may recall that a few years ago Fred Patten wrote an article for Flayrah.com about a very, very strange Korean animated film called Satellite Girl and Milk Cow. Here, we’ll let Fred summarize the plot: It’s about “… a pianist (male), transformed into a cow (female) by Merlin the Magician in the form of an anthropomorphic roll of toilet paper, and pursued by a villainous incinerator that wants to incinerate him/her; while a communication satellite falls from space, becomes an Astro Boy-like robot girl, and saves the cow from the incinerator and its secret agents.” Got all that? No? It’s okay, we don’t either. So why bring this up now? Well thanks to Animation World Network we’ve learned that GKIDS has finally picked up the rights for the film, and they will be releasing a subtitled version to theaters and DVD later this summer. 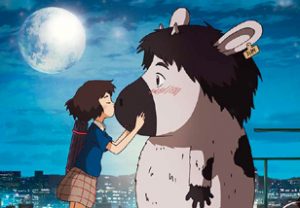