Son of Dragon: Save the World

New from Humanoids we have Dragonseed, a full-color fantasy graphic novel written by Kurt McClung (Might & Magic) and illustrated by the team of Jimenez and Mateo Guerrero (Warlands). “For centuries the men and creatures of Krath have prepared for a conflict that many hoped would never happen. A half-blood, Adam Serre Shadow, now has just two moons to find the thief of the teardrop stone, stolen from his fire-breathing father, before the Council of Elders trigger all-out war. The son of a Dragon will stop at nothing to find the magical relic and preserve the fragile peace that still exists between the two species.” It’s available now as a digital comic and as a deluxe hardcover. 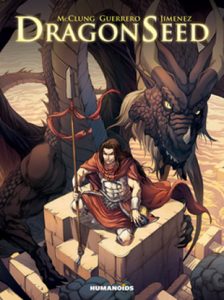 Interesting. I'm always tempted by these types of stories about half/half characters. Though, I always wish that there were more of them where the character didn't appear as a human with X powers. I guess maybe that's the furry in me wanting something more exotic, but it also makes for cool storytelling when the character has to deal with the reaction of society to them looking different. I might check this out though.

I'm with you on that thought. Make sure to check out the series known as Firebreather, if you haven't.