Hopping Around the Issue

Things do get strange in the world of politics, and likely many people would agree that things have gotten even more strange than usual of late. And now, we can add furries to the mix! Follow us here: Vice President Mike Pence and his family wrote a book, Marlon Bundo’s Day in the Life of the Vice President, which details that very thing — from the point of view of the Pence family’s new pet rabbit, Marlon Bundo. (The text is actually by daughter Charlotte Pence, with illustrations by Second Lady Karen Pence, who is a watercolor artist.) Not to be outdone, upon hearing news of this political comedian John Oliver and his crew at Last Week Tonight created A Day in the Life of Marlon Bundo, written by Jill Twiss and illustrated by E.G. Keller. Marlon Bundo is bored with his life as a vice-presidential pet, until one day he falls in love with another male rabbit named Wesley. Marlon offers Wesley his paw in marriage, but their same-sex union is loudly opposed by a stink bug — with a suspiciously familiar crop of white hair. Upon its release, the Marlon Bundo book instantly became a #1 best-seller on Amazon. It’s available now from Chronicle Books. 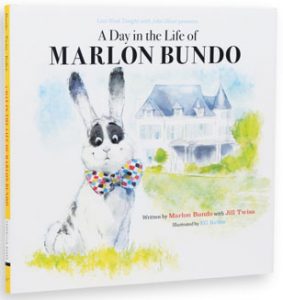 Also notable is that one of the domains registered by Oliver and company (no pun intended) is http://www.focusonthefurmily.com (a jab at Pence's support for Focus on the Family).

I'm calling this one as a contender for the Graphic Story of 2018 Ursa Majors for sure, seeing how prolific it became so quickly.

This is published by Chronicle Books, which is also the publisher of The Art of Zootopia, if that matters.

It was published in March 2018, so it will be eligible for next year's ballot. Will we remember it a year from now when it's time to make our nominations?

Speaking of the Ursa Major Awards, the voting for the 2017 Awards closes on March 31st. Have you voted yet?