What’s the Price of Admission?

For a while we’ve been hearing about a new animated film called Wonder Park. Well now Paramount Pictures have released the first teaser trailer, and Animation Scoop has more information. What’s it about? “One magical day, June is running through the woods to find her way home where she discovers an old rollercoaster car and climbs inside. She suddenly finds herself in Wonderland, an amusement park she had created in her mind and put aside. All of her rides and characters are brought to life but are falling into disarray without her. Now, with the help of her fun and lovable park characters, June will have to put the wonder back in Wonderland before it is lost forever.”  Ooo… The voice cast includes Jennifer Garner, Matthew Broderick, John Oliver, Mila Kunis, and Kenan Thompson. Directed by Dylan Brown, Wonder Park is set to be released in March of 2019. 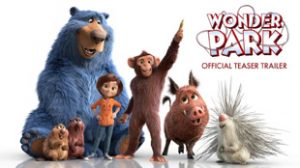 Why is the movie titled Wonder Park when all the characters in it call it Wonderland?

I was largely wondering that myself. My best guess is Wonderland is copyrighted to someone else, but then why would they use it in the movie...?