So here’s what we just found over at Slash Film: “Variety reports that [Dreamworks Animation] is in final negotiations for the movie rights to Jerry Hawthorne’s board game Mice and Mystics. The role-playing game, which was our No. 1 pick for games that should be adapted to film, follows mice heroes who must race through a vast castle to break the curse of the evil Vanestra, fighting rats, cockroaches, spiders, and the castle cat, Brodie. Its complex, deeply involved story seemed perfect for a big-screen adaptation, and it seems that DreamWorks thinks so too. If talks go through, The Hills Have Eyes and Horns director Alexandre Aja is set to direct a script by Aquaman scribe David Leslie Johnson. Vertigo Entertainment’s Roy Lee and Jon Berg are producing.” Sounds like there is some serious talent behind this project, yes? 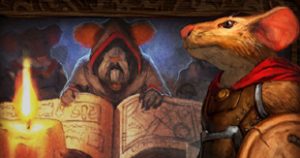