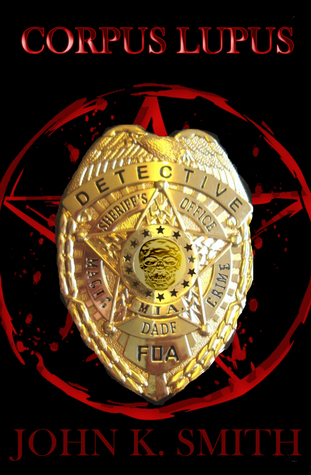 This book is actually a collection of three novellas about your worst nightmare: A WEREWOLF WITH A BADGE.

Highridge is a cop that became a werewolf in an Urban Fantasy Setting where lycanthropes have a subculture and are an accepted part of modern society. And the revelation of their existence is no recent thing.

As is often the case when the werewolves are (mostly) good guys, there are worse things out there than wolfmen.

Readers, do you have triggers? You will find them here. All that you think is right and wrong in the world has little to no relevance here. God isn't dead; but he wishes he were. If Horror Noir is a thing...this is a collection of Horror Noir.

In point of fact, almost all the magical power in this world comes from death of some sort. Demons are but a thin membrane of reality away and necromancers are the first line of defense against these threats and many the public never ever hears about.

Every corpse is staked, for example. Bad things could happen when a corpse isn't staked.

Killing a child in a universe like this creates a lot of energy the killer can use for almost any purpose, provided he knows the best cuts. The butchering of three boys in the shadow of their tree house provided the murderer with a lot of power.

The race is on, not just to "bring the killer to justice," but to keep him from using that power to do... well, anything he wants.

The crime and the risk is enough for the necromancers to send in Dr. Muggs, the local necromancer and fixer. It is an awkward teaming as there is so little Muggs can tell Hightower without violating his oath of secrecy.

Things aren't made better with Hightower's Alpha getting on his case and trying to provoke a battle between them. Cop ethics and Pack ethics do not align well. Before the case of the child killer can be solved, Hightower is too driven by instinct to be a good cop. He takes medical leave.

The story provides good procedural and easily doles out the magical rules (which stay consistent through all three novellas). Hightower seems like a good man and an honest cop, and, in the end, he must sacrifice a little of his soul to save his life and bring a killer to justice.

The story starts out with the same police procedural trappings as Corpus Lupus but it quickly veers into outright horror as Hightower attempts to investigate an otherworldly portal. As established in the previous tale, murder is the most powerful force there is. Hightower knows death is on the other side of that door. Yet...yet...a whole apartment is missing. And the family that lived there...one or more of them might still be alive.

Now, the rescuer must be rescued from the nicely written plot of hell that apartment has become.

There is a gate-keeping monster here, too, drawn from the mind of Hightower himself. A bigger, badder wolf that Hightower must escape and, if he survives, destroy.

It's a tense and exciting series of events where Hightower's own werewolf instincts might betray him and the solution to this is interesting and a little mind-warping. My only complaint is the big bad is referred to as bisexual when the description obviously shows the creature to be more of a simultaneous (or synchronous) hermaphrodite.

And a rather vigorous one at that.

Now, I know (I cheated and looked it up) "bisexual's" original meaning is exactly that: "having both sexes in one being, hermaphroditic." Still, in a modern setting it's rather upsetting to see one's label used so monstrously.

I'm sure that I've done worse, so enough on that.

There's some magic in a conference room that I think I could have done without, especially knowing that someone died for that Power for that trick, in whole or in part. Yet, when I reflect now, I see that this mild scene, as mundane as making flowers out of thin air could be compared to the hellish summoning and werewolves tearing out each other throats... it does hint at the shades of humanity that Hightower has already lost.

You see, in the first story, the werewolf detective knows the names of the victims who donated their ashes. He is acutely aware of each sacrifice as much as he is able. He is fascinated and not appalled by his lesson... or its cost. I am curious to now if that's how Smith intended it.

A small departure as Hightower travels with his pet monster, but he very quickly ends up investigating a magic murder. Although there is a great deal of debate about the nature of the killing.

We discover much more about the nature of magic and of the multiverse that this universe is a part of. Hightower has to face aliens and, worse, what people must do in order to survive. Plus he meets what may be the mad god at the center of it all.

This last story had a few light and disturbing moments and presented a more rounded story than the other two. It is also infinitely darker as Hightower once more allows himself to become a tool for the greater good in a secret war of sorts.

It is a darkly refreshing universe that reminds us Power has a cost.

Yes, it is. I've re-released it under a pseudonym because people were reading my bunny-books and liking them, then buying this and... Not. In far too many cases they complained and left bad reviews because the work is so different than my usual stuff, and in a very nasty way. So, this seemed the best solution for everyone involved. Thanks for noticing though, Fred!