Are They Not Men?

IDW Publishing have an interesting new take on a very famous anthropomorphic story. They talk about it over at Bleeding Cool: “IDW will be publishing a gender-swapped adaptation of H.G. Wells‘ The Island Of Dr Moreau by IDW founder Ted Adams and Locke & Key co-creator Gabriel Rodriguez. Protaginist Edward Prendick is now Ellen Prendick, as the comic book will be told Promethea-style in double page spreads… The Island of Doctor Moreau, an 1896 science fiction novel by H. G. Wells tells the story of a shipwrecked man rescued by a passing boat who is left on the island home of Doctor Moreau, a mad scientist who creates human-like hybrid beings from animals via vivisection. The novel deals with a number of philosophical themes, including pain and cruelty, moral responsibility, human identity, and human interference with nature. Wells himself described it as ‘an exercise in youthful blasphemy’. And it is handily in the public domain.” This new version mini-series is due out in July. 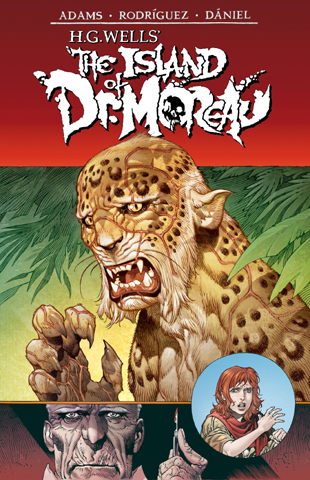 Are They Not Men?
They are DEVO