Oh, You Know, Girls and Horses…

Boom! Studios (through their Kaboom! imprint) recently released a new full-color graphic novel called Wonder Pony, written and illustrated by Marie Spénale. “For Louison, going back to school for sixth grade looks set to be eventful to say the least . . . not only is it time to face the terrifying world of boarding school and making friends, but it turns out she has superpowers! Thanks to her friend Jean-Pierre – who happens to be a pink pony – Louison gains the ability to transform herself into a superheroine: Wonder Pony. Her mission? To watch over the school, and protect her classmates and friends from any dangers that might arise . . .” Boom! have an extensive preview at their web site. (Interesting how the ad says “Discover the Magical Power of Friendship…” Hee hee hee.) 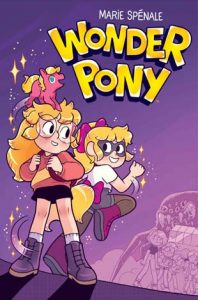 Sigh. Pretty easy to snark about tween girl content on a site aimed at grownups, isn't it?

Maybe instead of a throwaway review like this, the author could discuss how femalecentric content can empower girls' imaginations.

Okay, a couple of factual errors here (some which render this comment actually quite funny); one, this isn't actually Flayrah content. This is syndicated content from InFurNation, so we don't actually have a lot control over that.

Second, not a review. Mostly this piece is just quoting the publisher's blurb. There's a bit of snark about the marketing, or at least that's my take; but to be clear, yeah, we're pretty down with pony thing here. Maybe the title is a bit closer to mean-spirited, but Mink is bringing it up not to make fun of things little girls like, but because we're the grownups who probably would most likely to like it too.

Third, and this is the really, really funny part; Flayrah assigning reviews, oh, wow that's a good one. This is basically volunteer basis (so actually you could and maybe should review it yourself), so if something gets reviewed its because the contributor who wrote the review wanted to, not because it was assigned by an editor, with a few minor exceptions. And InFurNation is the one guy, so, uh, he's not assigning anything to anyone.

I'm not going to number because, it's a fair point, we're not totally a sausage fest. Probably mostly. But not totally.

Thanks for replying. I didn't realize Mark/Mink was writing syndicated copy. Maybe I also took it as more straight snark than it was meant to be. Another cup of coffee could possibly have adjusted my point of view to be sunnier.

I'm not the right gender to be writing a review -- I really do think it takes a woman's voice to channel some of her own experience as a sixth-grader and see if it reads as authentic, empowering, or just plain facile.

Thanks for doing what you do, and making Flayrah one of the sites i open by default.

Gah... I really COULD have sounded a bit less snitty, couldn't I? And yes, I probably could have thought up a more interesting and better title if >I< had had a couple more cups of coffee... Anyway, if you're not aware of InFurNation.com, I do my best to try and AVOID doing reviews -- I'm simply making furry fans aware of content that is out there. If I genuinely don't like something, I simply don't mention it on my site. Wonder Pony is actually a quite popular comic in Europe, and Boom! has finally got around to releasing an English version for North America, so people should definitely check it out. But yes, I do still think it's funny that someone (at either Boom! or the original publisher in Europe)chose to use that exact phrase in the advertising for this... I wonder what Ms. Spenale thought of that?