Interesting story out of Variety (by way of Animation World Network): “Godzilla vs. Kong director Adam Wingard is attached to helm a computer-animated adaptation of the beloved 1980s Rankin Bass animated series Thundercats for Warner Bros., from a script Wingard will write with frequent collaborator Simon Barrett (You’re Next, The Guest)… The original series, which aired from 1985 to 1989, was revived for a single season Cartoon Network in 2011, and then again in 2020 under the title Thundercats Roar. But as a feature film, Thundercats has been a tricky project to crack for the studio, which has hired a small parade of screenwriters and producers since at least 2007 to bring a movie to life. The underlying story is at once relatively simple — a team of humanoid cat-people (or cat-like humans) like Lion-O, Panthro, and Cheetara fight the evil wizard Mumm-Ra on the planet of Third Earth — and surprisingly complicated, with a mix of technological space sci-fi and swords-and-sorcery fantasy.” Read the article at Variety for much more on this latest take on our friends from Thundera. 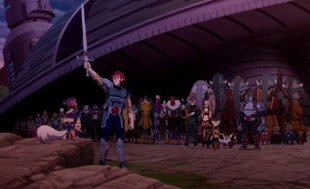