After The Turtles… The Cats

We got this from Movie Finatic: Animation fandom circles are all a-buzz (or is it reeling?) from the news that director and producer Michael Bay, fresh from his successful (at least financially) re-boot of the Teenage Mutant Ninja Turtles franchise is now set to give a try at a live-action movie based on (wait for it): ThunderCats. The thought of Mr. Bay taking on another 80’s animated TV icon was enough for no less than The Onion to create their own spoof article. But is all this just talk or is it actually happening? Stay Tooned! *Snarf Snarf Snarf…* 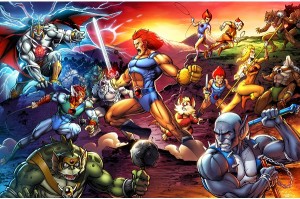 ThunderCats on the loose, again

A new series of Thundercats is to be made (in a distinctly different style) by Tokyo-based Studio 4°C in collaboration with Warner Bros. Animation.

According to a press release, the series will retell the "grand origin story of Prince Lion-O's ascension to the throne – and of those who would thwart his destiny at any cost."