Sweets On The Way

Oops! Remember last year, when we mentioned that Netflix was creating a new animated series based on Jeff Lemire’s critically-praised comic Sweet Tooth? Well either the news was incorrect, or else Netflix changed their mind about the format, because they just released a teaser trailer — for the new live action series. “Based on the beloved DC Comic, and Executive Produced by Susan Downey and Robert Downey Jr., Sweet Tooth is a post-apocalyptic fairy tale about a hybrid deer-boy and a wandering loner who embark on an extraordinary adventure.” All episodes will begin streaming on July 4th. 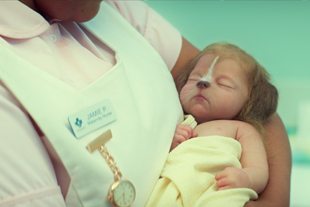 It actually starts streaming early June. Or at least that's what I was told when Netflix backed up a dump truck of money at our VFX company to finish the work a month early.

Thank you for filling us in! Was this in fact originally planned as an animated project? That's what the article way-back-when at Animation World Network seemed to indicate.

That part I have no idea about. I didn't even know this adaptation existed until we started working on it, and when I first heard the title "Sweet Tooth," I thought it might have been an adaptation of the Twisted Metal game series. So shows how much I know.