Back on the Road ['Extinctioners']

One of the classics of anthropomorphic superhero comics, Extinctioners by Shawntae Howard, is available again in digital form. Originally published in black & white by Shanda Fantasy Arts, Extinctioners: Road to Extinction #1 – 5 have been scanned for download by Angry Viking Press. “It was a time for celebration. The budding of young romances, the coming of age transition from child to young adult, and the promising hope of the future. Katherine Fela and Scarlet Starfox’s lives could not have been more different from one another, but the appearance of alien invaders would forever intertwine their destinies. ” Check it out at Drive Thru Comics. This version includes a brand new full-color cover. 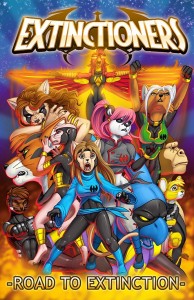