Badger is Back and Even Badder

Look out!  The Honey Badger is back! And he still doesn’t care… Once more Fred Perry and Jey Odin present the black & white adventures of the world’s toughest mustelid in Honey Badger vs. the World. “This is the Honey Badger. He’s had his own video, commercials, and even a comic book. But Honey Badger don’t care. Long as he gets to eat whenever he’s not asleep, that’s all that matters. Plenty of animals, people, and…things…have a problem with the Honey Badger’s attitude, and they’re all gonna be up in his furry grill, but when you’re that badass, you don’t give… well, you know.” This new one-shot is coming from Antarctic Press in January. 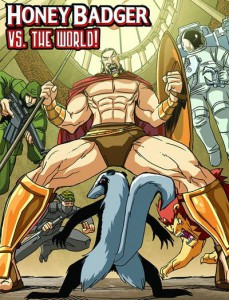