Guide the Dragons of the Sun

More new dragon fantasy books: Spirits of the Sun, Book One in the new Diego’s Dragon series by Kevin Gerard (published by Crying Cougar Press). “An eleven-year-old Latino boy wins a district-wide writing contest for sixth graders. When an author visits his school to award his prize, Diego Ramirez has no idea how much his life is about to change. Nathan Sullivan hands Diego his statue, a handsome, glistening black dragon. After hearing the name Magnifico spoken aloud by family and friends, Diego awards it to his new dragon. If he only knew how fitting the name was, he might have known what lay ahead: Magnifico is the leader of the Sol Dragones, dragons that live within the magical fires of the sun. Nathan Sullivan is the earth’s connection to the mysterious creatures. It is his task to find Magnifico’s guide. As Magnifico comes to life he becomes quite mischievous, playing tricks on Diego to embarrass him. As he discovers his bloodline, however, Diego assumes greater control over his dragon and his destiny.” There’s a video on YouTube introducing you to the series, and more information over on the official web site. 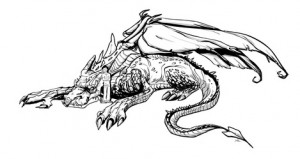