Watch Him, If You Dare

Quick on the bouncing furry heels of All Hail King Julien, Dreamworks Animation presents the premier of The Adventures of Puss in Boots — coming to Netflix later this month. “The Adventures of Puss in Boots finds the world’s most famous feline fortune-hunter in the hidden city of San Lorenzo, a mythical land that is invisible to the outside world thanks to a magical spell that protects its quirky inhabitants — not to mention its wondrous treasure. When Puss in Boots accidentally breaks the spell, he must do more than fight off an endless legion of invaders and marauders — he must become a legend.” According to an article over at Animation World Network, five episodes will premier on the 16th with more to follow. Soon, the tide of original Dreamworks programming for Netflix will include new episodes of Dreamworks Dragons and the new series Dinotrux. 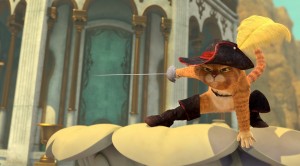